Some days are more exciting than others – case in point, the morning that a pair of red-shouldered hawks locked talons and spiraled out of the sky to land in a heap in my yard.

It was a Thursday late morning. I had just logged into an hour-long WebEx meeting with some clients, when out of nowhere, a pair of red-shouldered hawks crash-landed directly in front of my office window. My jaw dropped, I looked helplessly at my husband, who stared back with wide eyes, and we froze for a moment…trying to parse the spectacle of posturing and grappling.

Lucky for me, he’s had just enough experience handling my camera that when I checked the settings and silently pressed it into his hands with The Look, he ducked outside to try to document the excitement.

Meanwhile, I sat riveted, almost entirely unable to focus on the meeting, while these two rolled around in the lawn with their talons locked.

One of the two was immature, with chest and under-wing feathers not yet developed into adult plumage. It was an almost entirely silent affair, which seemed odd. Finally, one flew off and the other flew into our tree.

Here, have a slideshow of all the photos in this series! 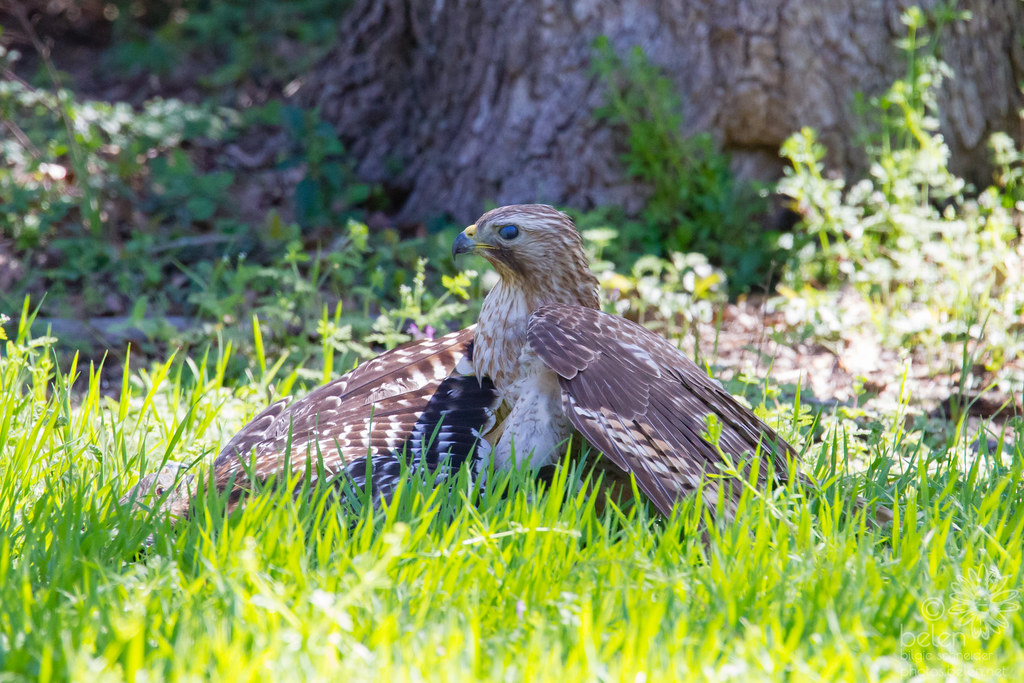 I spent quite a bit of time trying to figure out what I was seeing, and I still don’t have answers.

There are plenty of accounts of red-tailed hawks locking talons like this and spiraling to the ground as part of their courtship ritual, but there are none for red-shouldered hawks that I could find. There is ONE documented case of a red-shouldered hawk event like this, and it was categorized as a territorial dispute.

The fact that it was an immature and mature hawk lends itself to this being a turf war. As I came to understand, we have had nesting red-shouldered hawks in this neighborhood for a while, and this year our neighbor also said he had experienced the same locked-talons spectacle in his own yard in a previous year. This news made me hopeful that this might not be a once-in-a-lifetime sort of event.

As with so many observations, I hope someday to have a better understanding of the amazing event that unfolded during a Very Average Work Meeting.